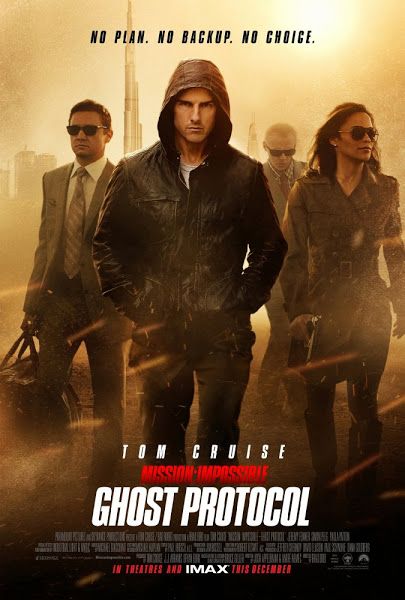 Reviewed by, April 12, 2012 Predict the unthinkable. There's never a dull moment in the life of IMF agent Ethan Hunt. With more death-defying, hard-hitting, every-millisecond-counts action-per-adventure to his name than and just as much international intrigue and danger under his belt as, it's a wonder he's still walking around in one piece, let alone crawling up the sides of buildings, shooting straight, and running just a hair slower than a gazelle. Where most people would probably be at best on the IMF disabled list, maybe in a coma, and at worst six feet under, Ethan Hunt stays in the game, showing that he's either a very skilled and tough freak of nature, or at the very least one lucky hombre. He's back for his fourth filmed adventure in 15 years (granted there's a lot of recuperating time in there), this one falling under the title of Ghost Protocol, and it's a doozy of an Action/Intrigue flick.

While it may not have as much raw action as or the excellent storyline, smoothness, and integrity of the, Ghost Protocol delivers unparalleled thrills, serves up a never- ending buffet of cutting-edge gadgetry that puts Q's best to shame, showcases death-defying action, and works in just enough quick wit to counterbalance the immediacy and danger of the mission, a mission with repercussions so grave that all of Hunt's previously-accepted missions pale in comparison. Expect the impossible. IMF agent Trevor Hanaway (Josh Holloway) is killed in the line of duty whilst smuggling critical files out of Budapest, files containing nuclear launch codes that are the only thing standing between peace and all-out armageddon. Meanwhile in Russia, IMF agent Ethan Hunt (Tom Cruise) is freed from prison with the help of agents Carter (Paula Patton) and Dunn (Simon Pegg). His mission: infiltrate the Kremlin, track down an elusive figure known as 'Cobalt,' retrieve the launch codes, and prevent nuclear holocaust.

The infiltration proves successful, but the mission fails when the files cannot be located. The team's safety is jeopardized when an explosion rocks the Kremlin and Hunt's team is blamed. Russian- American tensions escalate to unprecedented heights, the IMF is disavowed by order of the President, and Hunt and his team must go rogue to track down Cobalt and prevent the unthinkable.

With no backup, little time, and only a few resources, the team must travel the globe in an effort to save humanity from a madman with his finger on the deadliest trigger of them all and a plan to wipe humanity off the face of the Earth. Ghost Protocol proves itself to be one of the most enjoyable films to come around in a good long while. Certainly it lacks meaning or purpose in a thematic sense, but few pictures of the escapist/adrenaline rush variety are as expertly-assembled as this. Ghost Protocol serves up some of the most exciting thrills and chills yet, not only of the Mission: Impossible series but through the entire history of the Spy/Thriller/Action canon. The picture is constructed with pure old-fashioned entertainment in mind but delivers plenty of modern twists thrown in to keep the movie feeling fresh and on the edge of excitement.

The film defines 'spectacle' in every way, whether dabbling in high-tech infiltration or low-tech espionage, whether making use of advanced computer equipment, gadgets that blur the line between the human and the electronic, or showcasing characters taking advantage of good old fashioned shadows and hoods and disguises to collect intelligence or sneak about under cover or out in the open. The movie is every bit what a Mission: Impossible picture should be. Whether the writers have simply pulled the film's technology out of thin air to serve the plot or if it's really somewhere secretly based in some laboratory just doesn't matter. What matters is that the picture supercharges reality and exceeds audience expectations.

The technology of this film never ceases to dazzle, whether working as intended or failing miserably, the former leaving audiences breathless and the latter often used to excessively dangerous yet infectiously humorous effect. That humor is probably as big an asset as the special effects and stunts in making Ghost Protocol a major success.

Simon Pegg's role as a wet-behind-the-ears field agent largely defines the film. He's often the audience's eyes and ears, dazzled by what he sees and hears but remaining focused and working with integrity even has he marvels at the action, nearly causes something to go wrong, or participates in his own little way, which is dwarfed by Ethan's work and talents but that's no small accomplishment in his eyes or in the audience's own perception or skill level. The character is chatty but not obnoxiously so. Pegg creates a critical and relatable character in a movie otherwise defined by larger-than-life stunt work, amazing technology, and a devastating global threat. That levity puts the audience at ease, allows them to exhale sometimes even during the film's most breathless moments.

Yet the picture remains defined by the impossible stunts and grand special effects. While the technology may be ahead of its time and advanced beyond the other films, Ghost Protocol easily settles into the classic Mission: Impossible comfort zone. The audience knows all will work out for the best in the end, but it's the film's ability to easily paint a picture of daring feats of human agility and churn out scene after scene of unparalleled tension - whether whisper-quiet or in the middle of a raging sandstorm - that keeps the audience on- edge. Predicability is the least of the film's worries because it counters that predicability with sufficient danger and a real sense of fear that keeps the movie moving at a breakneck pace, even if deep down the audience knows Ethan won't plummet to his death or otherwise fail to save the day. Mission: Impossible - Ghost Protocol features a stunning and absolutely immersive Dolby TrueHD 7.1 lossless soundtrack. No matter the element, regardless of the situation, and at any point in the movie, this track yields exceptional sound, from the most hushed moments to the most energized actions scenes.

The track's ability to precisely place every sound effect and play it with such a natural presence proves just as impressive as the heaviest action sounds. Simple things like the humming of a hard drive in a quiet room; the closed-in audible sensation of a dark and damp sewer above which an alarm blares away; creaking doors; interior rattling of a moving van or train; or even the precision sound of almost absolute silence as Hunt and Dunn use high tech wizardry to infiltrate the Kremlin, their breaths and the slightest leathery creases in their shoes the only things that might betray their presence, all play with beautiful clarity that pulls the audience into the film and steals their breaths with the sounds of near silence. Yet for as superb as these effects may be, and as completely immersive as they are, the track really struts its stuff when it comes time for music and action.

The theme music has never sounded so crisp and perfectly defined and spacious as it does here. The classic notes play with such authenticity that the speakers melt away as if it were being performed live. The chaos of action is infinitely entertaining and sonically exacting. Gunshots deliver precise cracking and echoing. Crunching metal, powerful gusting winds, and penetrating lows all give shape and style to the track.

Imaging is seamless, directional effects are accurate, and the track constantly makes fine use of all of its channels, whether in the delivery of that action or those most quiet effects. Rounded out by faultless dialogue reproduction, Mission: Impossible - Ghost Protocol's 7.1 lossless track is amongst the best Blu-ray has to offer. Mission: Impossible - Ghost Protocol's general release contains all of its supplements on disc one. Disc two contains a DVD copy of the film. UV and downloadable Digital Copies are also available. The supplements are subdivided into several categories, chiefly Mission Accepted, Impossible Missions, and Deleted Scenes.

Supplements are available with optional English, French, Spanish, and Portuguese subtitles. NOTE: only by purchasing the will viewers be able to enjoy the entire collection of Ghost Protocol supplements. This Amazon.com/general retailer release contains only one Blu-ray disc and features a condensed collection of extras. Mission Accepted - Heating Up in Dubai (1080p, 17:36): This piece looks at the beauty of the city, the benefits and challenges of shooting at The Burj Khalifa, ensuring authenticity in the death-defying scenes shot there, the difficulties of the stunts, filming high up, and shooting in large format. Mission Accepted - Vancouver Fisticuffs (1080p, 12:01): Shooting various scenes around Vancouver, including the complex finale.

The pice also examines the complexity of the entire film, Brad Bird's work, and more. Impossible Missions - The Sandstorm (1080p, 3:06): A raw look at the two-week process of creating this critical scene that runs for 5:43.

It's wonderfully cast - Tom Cruise still does his thing with incredible skill and stamina - and every single facet of the production is nothing less than first-class. Never is the film dumbed down, never does it cut any corners. It's well worth the price of a ticket - or a Blu-ray disc - and enjoys high replay value. Ghost Protocol does the Mission: Impossible franchise and the good name of big budget Action flicks proud. Paramount's Blu-ray release of Mission: Impossible - Ghost Protocol dazzles with perfect video and audio, but this release features a neutered collection of supplements. Remember, this is the general retailer/Amazon.com release with only some of the extras included. Fans who want the full collection of bonus features need purchase through Best Buy.

TL;DR: Visually stunning, action filled and down to earth action sequences (no over the top BS). Storyline with nice twists and pretty good for an action movie, though watching Ghost Protocol helps getting to know the IMF crew (there's no introduction this time around).spoiler-free. Rogue Nation, like the latest movies in the franchise and others in the spy/action genre, starts with a small crew, with little support, against huge odds, having to deal with challenges that seem impossible (no pun intended).

What makes Rogue Nation better than most is that it makes it all plausible without super-human characters, crazy gizmos (except one that I shaw not mention, but it is not overused like in M:I II), and brilliantly made down-to-earth action sequences. The latest 007 movies are following the same ideals, but M:I has made a solid choice of supporting actors (specially Simon Pegg) that add a subtle layer of comedy and improvisation, which helps a lot into building some suspense in the audience - it feels like as if they are as clueless as we are of what is going to happen.

Another great aspect that sets this moving apart are the terrific action sequences which are paired with outstanding sound effects and music score (without spoiling, there is an entire action sequence that plays with this very aspect). Was lucky enough to watch a pre-screening on IMAX, and strongly recommend watching it on IMAX or a theater with a good audio setup. The storyline, while not hard to follow, benefits from having watched at least Ghost Protocol, since key characters are back and lack some introduction, and the story somewhat picks from what took place in the last instance. Much like Ghost Protocol, the storyline packs some interesting twists and doesn't seem obvious - even though we all know that the good guys win, Rogue Nation adds some shady characters which are not as black and white, making for some interesting development. Overall a highly entertaining movie, packed with stunning action sequences and a storyline that is well thought-out and manages to keep the audience hooked until the end. A solid addition to the franchise that keeps one-upping itself on every new release.