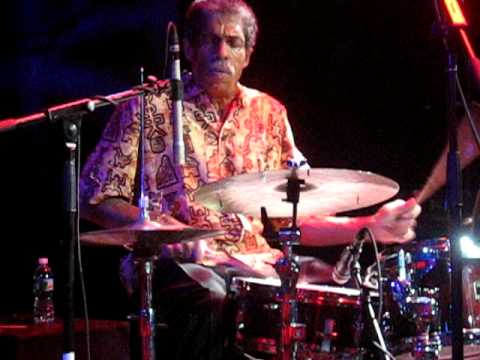 Kieran Hebden (Four Tet) and Steve Reid (who has beat skins for Sun Ra, James Brown, Fela Kuti, and Miles Davis) have collaborated in various forms over the past few years, starting with the Exchange Sessions in 2006 and most recently on Reid’s recent release Daxaar. NYC, their new collaborative.

Born in the South Bronx,[2] Reid started drumming at 16. His family moved to Queens, New York, three blocks away from John Coltrane. Before attending Adelphi University in Garden City, New York, he worked as part of the Apollo Theatre House Band and recorded with Martha and the Vandellas under the direction of Quincy Jones.[3]

In 1969, Reid refused to register for the draft during the Vietnam War.[4] He was arrested as a conscientious objector and sentenced to a four-year prison sentence at Lewisburg Federal Penitentiary, where he served with Jimmy Hoffa. After his release on parole in 1971, Reid found work as a session musician with Dionne Warwick, Horace Silver, Charles Tyler, Sun Ra, and Freddie Hubbard, in addition to Broadway stage work.

In 1974, Reid formed the Legendary Master Brotherhood and his record label, Mustevic Sound.[5]

With Martha and the VandellasCinta2fmati 2013 full movie xxi.