Genre: Action RPG Publisher: Ubisoft Developer: Cavia Release Date: February 14, 2006 Buy 'DRAKENGARD 2': It sure didn't seem that way at first, but this Drakengard thing Square Enix has going might actually have some legs. Look at the first Drakengard, the heavily hyped piece of undercooked action gaming that preceded this title. It was clunky and unfun and the popular backlash against it was immediate, because they had said and everyone believed at the time that 'mixing Dynasty Warriors with Panzer Dragoon is a very good idea.' It is a very good idea, and remains a very good idea; that it actually gained some traction and name recognition among fans despite the shoddy implementation is a testament to how good this genre blend seems in theory. As a result, we get Drakengard 2, which takes us right out of the theoretical. We know now that you can mix these games, and we have proof that it works. There are still a lot of kinks to work out, but the core is there, and kinks can be considered 'room to grow.'

There's a future in Drakengard. Drakengard 2 is the present of the series though, and it's a solid, fun game. It doesn't go a lot further than necessary to prove the concept is sound, but let's face it – this is one strong concept. Innovation is all well and good, but if you're planning on staying in safe territory, you could do worse than getting Panzer Dragoon in your Dynasty Warriors. As an added bonus, the implementation is a lot tighter this time, and perhaps the best example of this is the dragon levels, which are great fun. The dragon controls very well, and the dogfights are fast and furious throughout. A simple but thoughtful design encourages the use of every weapon in the arsenal, which also increases gameplay variation; by making kills with the straight-shot fireball a means for unlocking ammo for the deadliest 'dragon overdrive' weapons, you don't use the much more effective lock-on targeting weapon at all times.

The on-foot levels also show a significant improvement over the last game. There's a group of four characters to use, and each one has strengths and weaknesses versus certain types of enemies. There's also a myriad of weapons for each character, which also level up based on usage. The real kicker is that longer combos give huge experience point multiplier bonuses, meaning faster leveling is not achieved by killing enemies in just a few hits. Thus, there is an incentive to use the worst possible character for any given situation, which can create some particularly harrowing situations.

Considering Drakengard 2 is also really quite easy, that makes a world of difference, and forces you to formulate some strategies outside of hammering the one attack button. Of course, you don't have to do that. In most cases, slamming one button will do you just fine, casting the game into repetition and drudgery. If that becomes boring though, you can always hop on the dragon, which is available in most on-foot levels without loading, and feels incredibly powerful, raining flaming death upon most earthbound enemies with incredible efficiency.

All of these things means there's just enough gameplay variation so you don't feel like you're slicing through 1,000 enemies every 20 minutes, keeping the game entertaining through its 20-some hour duration. It doesn't hold up past that, however, and the three endings and additional unlockables that reward you for multiple play-throughs don't justify the effort as tedium sets in. It sometimes almost seems as if there's too much crammed in there, too – so much so that the technology can't keep up. Kaveri in kasak. The camera is pretty clunky, so be prepared to fight some battles looking only at your character's feet. The controls on the ground are not particularly responsive, and I died several times because the game didn't detect my button press in time to parry a blow.

Draw distances are terrible on foot and in the sky, to the point where you can be shooting fireballs at empty patches of ground and killing hordes of invisible enemies that the game decided not to render. It's especially trying in the air levels, but it's a universal problem. On ground, all graphical detail suffers for the sake of rendering the army hordes. All of the levels are barren and flat-looking, and some of the enemies are extremely polygon-deficient. At least the player characters look pretty good, and the dragon levels are uniformly pretty, although the game does make you fight cubes. 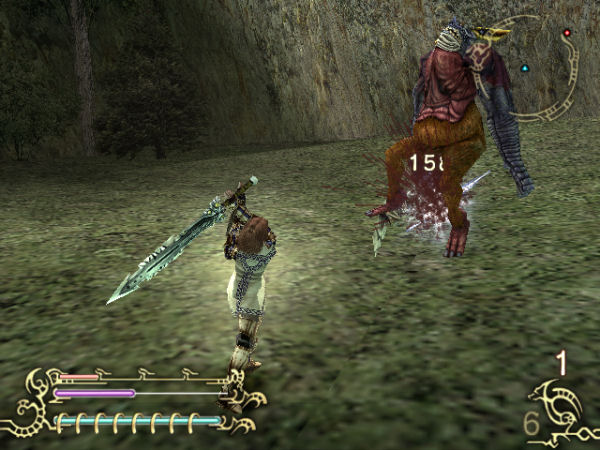 It can gussy them up and call them 'gargoyle cubes,' but they're still cubes, and since the last I checked, this wasn't 1995, so I have to take offense. As if to make up for an engine that couldn't really capture the vision Drakengard 2 clearly had in mind, it actually comes through with an interesting and somewhat different story to carry the action. There's a guy, see, named Nowe, who was raised by a dragon, Legna. He and the dragon are inseparable, but eventually he's found by a kind general Oror, who takes him in and makes him a Knight of the Seal. These knights rule the world via their protection of 'seals,' which they claim keep the world in balance.

In short form, Oror is killed, people start to rebel against the knights, and the hot young rebel leader provides evidence that the knights used brutal fascist methods in their rule, and one knight in particular may have been responsible for Oror's death, leading Nowe to think thoughts of both lust and revenge. His overreaction, naturally, has catastrophic results for his way of life, and with no actual solid evidence as to whether the knights or the rebels are in the right and a complete inability to see moral shades of gray, Nowe begins to think with his pants and his instincts and drives the problem deeper and deeper. It's rare that we see actual moral ambiguity in a game, let alone a conflict that's caused entirely by the badly thought-out actions of a confused protagonist, so Drakengard 2 deserves some kudos for stepping outside of the box in this regard. Drakengard 2 deserves quite a bit of kudos, actually, but there are plenty of valid complaints about it as well. It's repetitive and technically deficient, but the fact that they managed to squeeze this concept onto a console woefully inadequate for it and still come out with a fun game at all is surprising, and provides hope for the future. Drakengard 2 is a good game, but with more attention to detail and the next generation of hardware, this series could really start to sing.